Lock It or Lose It - Red Deer 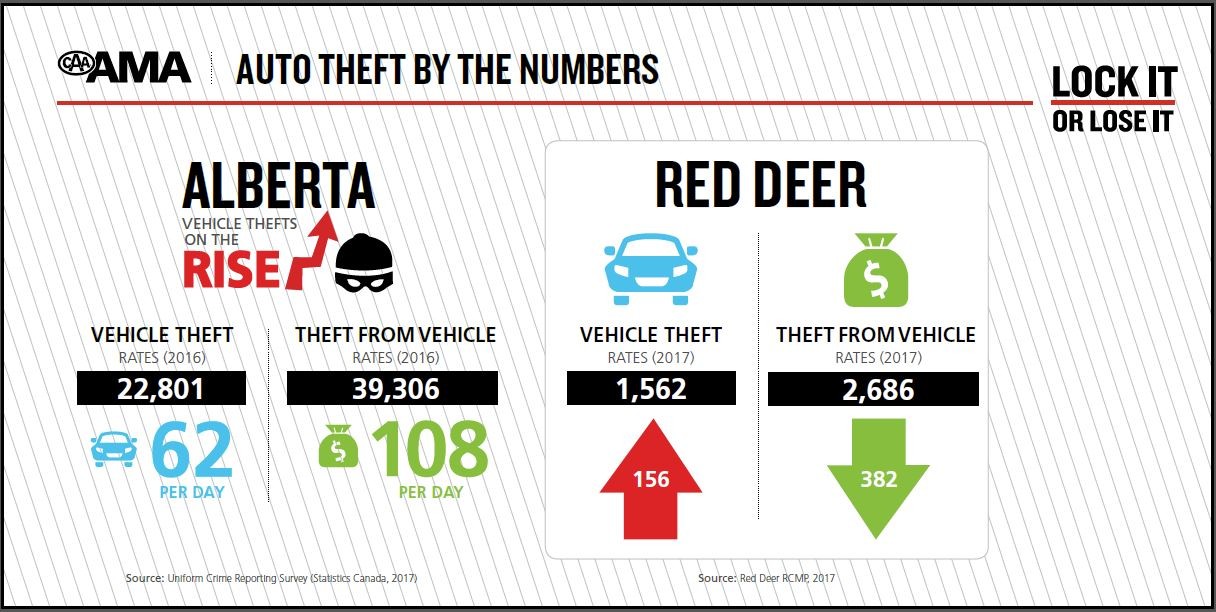 Alberta leads the country in vehicle thefts, accounting for more than a quarter (29 per cent) of all thefts in Canada, according to the most recent Statistics Canada’s Uniform Crime Reporting Survey. That’s almost 23,000 motor vehicles stolen – more than three times the national average and a whopping 62 vehicles a day. Red Deer RCMP reported more than 1,500 stolen vehicles in 2017.

AMA is calling attention to this growing concern with Lock It or Lose It, a new public awareness campaign in partnership with local police services. The campaign encourages people to be mindful of vehicle theft and the simple steps they can take to prevent it – remove the keys, hide or remove all valuables, and lock it up!

“The rise of vehicle thefts in Alberta is staggering and, in many cases, we can do much more to prevent it,” says Jeff Kasbrick, vice president of government and stakeholder relations at the AMA. “Unlocked doors or keys in the ignition are an open invitation for thieves to steal your vehicle. Lock It or Lose It is a reminder to take simple steps to curb vehicle theft and take away the welcome mat for thieves.”

Theft from vehicles (under $5,000) is also a concern. In 2017, Red Deer RCMP reported over 2,600 incidents. While that’s a decrease of 12.5 per cent from 2016, the numbers are still far too high with seven thefts occurring every day. Beyond valuables taken from vehicles, items with personal information, such as insurance papers and vehicle registration are a target and open the window to identity theft and fraud. Garage door openers and keys left in the vehicle can also increase the risk of home burglaries.

“Theft of vehicles and theft from vehicles both have far-reaching consequences, and RCMP encourage the community to support the crime reduction work of police by securing their vehicles, not leaving them running, and removing all valuables,” says Inspector Gerald Grobmeier of the Red Deer RCMP. “The risk of injury to the public and to police officers increases every year as criminals get more reckless attempting to evade arrest, and we’re also seeing notable increases in identity theft and fraud due to theft from vehicles. Red Deer RCMP and Citizens on Patrol have been conducting local Lock it or Lose it campaigns for a year, and we’re pleased to partner with AMA to amplify these important messages – there’s a lot at stake.”

Lock It or Lose It is an initiative designed to increase Albertans’ awareness of vehicle theft to arm them with some crime prevention tips. People are also encouraged to spread the word and share their stories using the hashtag #lockitorloseit.

“We want people to get into the habit of locking their vehicles, removing all valuables and taking their keys with them,” says Kasbrick.” Even if you think you’re only stepping out for a moment, a lot can happen. It’s just not worth the risk, let alone the headache.”