After checking off the endless months of winter, many Albertans count the summer months one holiday Monday at a time. For your typical road-tripper, summer kicks off with the Canada Day long weekend and wraps up with Labour Day. And while long weekends seem designed for lazy days at the lake or a quick dash to the Rockies, for police officers, EMTs and AMA tow truck operators who work the highways, the days can be long for much less pleasant reasons.

But what about other kinds of impairment, like fatigue, prescription drugs or marijuana? That’s where the statistics get a little fuzzy...

"Unlike alcohol - where a tried and tested approach to measuring blood alcohol concentration offers a very accurate read on impairment – the effects of other drugs or physical conditions can be difficult to quantify," explains Jeff Kasbrick, VP of Government and Stakeholder Relations with the Alberta Motor Association. 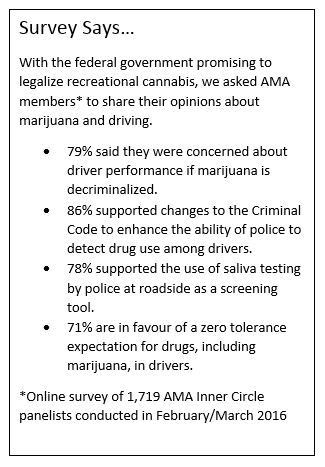 Recent research from our American cousins at AAA studied the “per se limits” of THC (the main psychoactive compound in Cannabis) and found that “there is no science showing that drivers reliably become impaired at a specific level of marijuana in the blood.” The same research showed that THC levels can drop rapidly during the time it takes to perform a blood test and that frequent users can exhibit persistent THC levels long after use, making it complex to correlate marijuana use with driver performance.

But before you roll one up to celebrate the news, the numbers coming out of Washington (where recreational marijuana was legalized in December 2012) give pause for some sober second thoughts. Collision data showed the percentage of drivers involved in fatal crashes after recently using marijuana more than doubled from eight to 17 percent between 2013 and 2014. That’s very close to the 15.9% of Alberta drivers involved in fatal collisions who consumed alcohol prior to the crash.

And that brings us full circle back to the Labour Day weekend and staying safe on Alberta’s roads. While marijuana and other drugs, which are still illegal in Canada, may fall into a grey area in terms of testable limits, we know it takes all your grey matter focused on the task of driving to avoid becoming a statistic in a collision report.

According to the Traffic Injury Research Foundation (TIRF) "cannabis significantly affects the skills necessary for driving." Research points to slower cognitive functioning, which can delay reaction times, distort time and the perception of distance, and make it more difficult to scan ahead for hazards or navigate turns across oncoming traffic. TIRF's analysis indicates that crash rates for cannabis users can be from two to six times higher than sober drivers.

"Whether it’s the excitement of a fully loaded RV with the wind at your back, or the fatigue of too many late nights around the campfire catching up with you on the way home, long weekends are prime time for traffic collisions," Kasbrick warns. "This isn’t an issue of knowing your limits; when we drink, smoke or drive exhausted it isn’t just your friends or family at danger. When you drive impaired everyone you share the road with has to live with that risk."

Law enforcement will be out in full force watching for speeders, distracted drivers and impaired drivers over the long weekend. And with the cost of an impaired driving conviction running up to $13,950, you’re better off spending your road trip budget on ice cream than gambling with innocent lives.