While polls suggest Canadian support for legalizing marijuana, that sentiment goes up in smoke when it comes to driving, according to a Canadian Automobile Association survey released today.

“We need to make sure that road safety is a top priority as marijuana is legalized,” said Jeff Walker, vice-president of public affairs for CAA National. “This is clearly a key issue for Canadians, and they are right to be worried.”

Sixty-one per cent of Canadians, and 59 per cent of Albertans, say marijuana is as much a threat – or even greater – than alcohol behind the wheel. Similarly, nearly three-quarters of Canadians (73 per cent) and Albertans (72 per cent) believe marijuana-use impairs a driver’s ability to operate a motor vehicle.

These concerns dovetail with a study by the Canadian Centre on Substance Abuse showing that marijuana doubles the risk of crash involvement. The challenge for law enforcement, however, is that there remains a lack of evidence to support a specific nanogram limit of THC, and the extent to which that limit is linked to actual impairment.

“Unlike alcohol, where a tried-and-tested approach to measuring blood alcohol concentration offers an accurate read on impairment, the effects of marijuana can be difficult to quantify,” said Jeff Kasbrick, VP of Government and Stakeholder Relations with AMA. “That’s why AMA, alongside CAA, is calling for ongoing government funding for improved measurement tools to recognize drugged driving.”

CAA has met extensively with the federal government to press it to allocate dedicated funding for public education campaigns that debunk myths and educate Canadians on the effects marijuana has on driving. CAA is also looking for clear and meaningful laws that discourage Canadians from choosing to operate a motor vehicle under the influence of marijuana, and enhanced resources to support law enforcement so Canadians take the law seriously.

A CAA-commissioned study, also released today, looked at the priorities provincial and federal governments need to focus on as they prepare to legalize marijuana. That study, conducted by the Traffic Injury Research Foundation, found:

The full report is available at caa.ca/drugdriving. 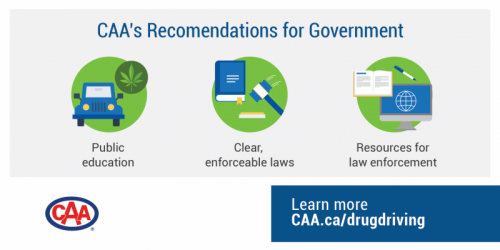 The Alberta Motor Association (AMA) is among the largest membership organizations in Alberta, representing more than 950,000 members. As a leading advocate for traffic safety, travel and consumer protection and crime prevention, AMA represents the interests of its members to industry and all levels of government and helps protect the things they care about most. Visit ama.ab.ca to learn more about AMA’s products, services and member advocacy efforts.